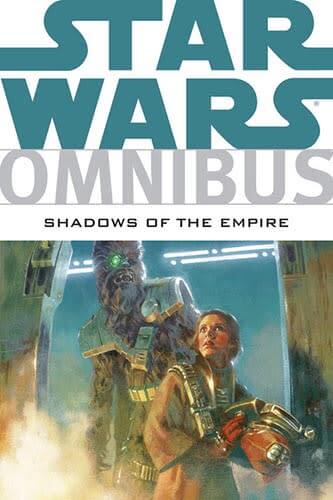 Omnibus: Shadows of the Empire

Publisher's SummaryBooks in this SeriesYoutini ReviewVideo ReviewStaff ReviewsCommunity ReviewsVideosCollections
Shadows of the Empire Omnibus collects three comic series from the Shadows of the Empire multimedia project. Set shortly after the events of Episode V, Shadows of the Empire sees Luke, Leia and Chewbacca set out to stop Boba Fett from delivering Han Solo’s carbonite-frozen body to Jabba the Hutt. They quickly find themselves targeted by Darth Vader, who still hopes to turn his son to the dark side, and crime lord Xizor of the Black Sun syndicate, who wants to deliver Luke to the Emperor first so he can usurp Vader’s position. Shadows of the Empire: Evolution follows Xizor’s former assassin, Guri, a gorgeous human-replica droid left reeling from the events of the first series. As Guri discovers her human side, the Rebels and a host of bounty hunters search for her to unlock the powerful secrets buried within her droid mind. Finally, in Mara Jade: By the Emperor’s Hand, Mara Jade embarks on her final mission as the Emperor’s assassin. Sent to take down a crime lord who hopes to reestablish the Black Sun syndicate, Mara’s life is soon thrown into chaos by the Rebel victory at Endor and the death of her Master. She vows to complete her final assignment, but knows that success may very well cost her life.