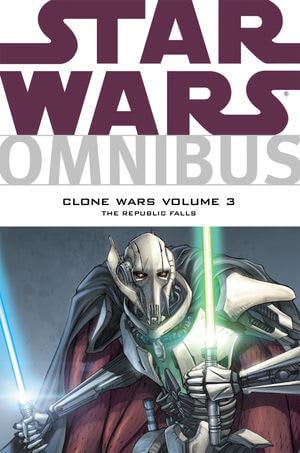 Publisher's SummaryBooks in this SeriesYoutini ReviewVideo ReviewStaff ReviewsCommunity ReviewsVideosCollections
In this Dark Horse Comics collection, we find the Clone Wars have taken their toll on the galaxy–and our heroes. Anakin is now a war hero, Obi-Wan becomes obsessed with finding Asajj Ventress, and Palpatine’s hold becomes increasingly strong on the Republic. All the while, Anakin and Padmé attempt to protect their secret.

Obi-Wan Kenobi recruits Anakin Skywalker in a desperate hunt for dark Jedi Asajj Ventress that will lead to a showdown with General Grievous and Count Dooku. Elsewhere, Jedi Generals infiltrate a Separatist base in hopes of concluding a protracted siege, and on Kashyyyk, as the clone troopers respond to Order 66, Master Quinlan Vos finds himself fighting against the army he led to victory. Collects Star Wars: Republic #70–#77 and #81–#83, Star Wars: Obsession #1–#5, and Free Comic Book Day 2005.