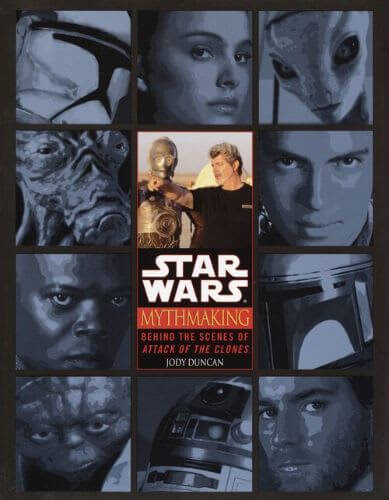 Mythmaking: Behind the Scenes of Attack of the Clones

By
Jody Duncan
Released
Oct 29, 2002
Artwork by
Narrated by
Takes place in
In the
era
Part of the
Collects
Masterpiece
Incredible
Good
Fair
Mediocre
Community Rating
#
in the
Youtini Reading Order

In producing all the thrilling characters, action, and romance that infuse the Star Wars epic with life, George Lucas and a host of talented actors, special-effects wizards, set designers, and visionaries of every sort have created a myth of stunning imagination. The saga has entered a new and startling phase with Star Wars Episode II: Attack of the Clones — and this book is the ultimate backstage pass to the making of this highly anticipated film. Filled with revealing observations from the myth-makers themselves, and featuring hundreds of exclusive, never-before-seen color photographs from the Lucasfilm archives, this extraordinary volume takes you through the complete filmmaking process, following the story — scene by scene — and reveals the secrets and the marvelous anecdotes that lie behind the movie magic. Inside you will find: Candid insights from stars Ewan McGregor, Natalie Portman, Samuel L. Jackson, Hayden Christensen, Christopher Lee, and Jimmy Smits — as well as from the man behind the phenomenon — George Lucas The secrets of the set designs, including the new planets of Kamino and Geonosis, explaining how the concept paintings and sketches led to three dimensional models and elaborate constructs on the vast sound stages in Australia The introduction of terrific new characters, including Senator Bail Organa, bounty hunters Jango Fett and Zam Wesell, Queen Jamillia, and Taun We Accounts of new digital wizardry and dazzling special-effects by Industrial Light & Magic, from the airspeeder chase to the climactic clone battle Insights from producer Rick McCallum, editor Ben Burtt, and a full team of creative talent, from costumemakers to sound technicians to lighting designers The story behind scenes that were cut from the final film — and the challenges of shooting an entire movie, for the first time in history, on high-definition digital videotape The only total-access look at the making of Star Wars: Episode II — Attack of the Clones — Mythmaking is a rare chance to watch creativity spring to life in George Lucas's monumental saga of good versus evil.