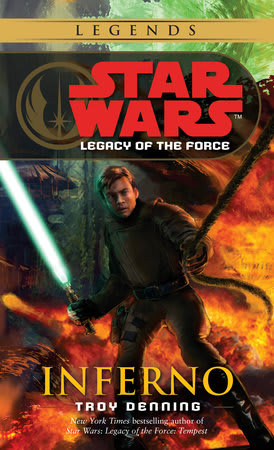 By
Troy Denning
Released
Aug 28, 2007
Artwork by
Narrated by
Marc Thompson
Takes place in
40 ABY
In the
Legacy
era
Part of the
Legacy of the Force Series
Collects
Masterpiece
Incredible
Good
Fair
Mediocre
Community Rating
#
117
in the
Youtini Reading Order

Publisher's SummaryBooks in this SeriesYoutini ReviewVideo ReviewStaff ReviewsCommunity ReviewsVideosCollections
Inferno is a critical turning point in the Legacy of the Force series. Darth Caedus sends troops to arrest Han and Leia Solo, Ben Skywalker looks for his chance to strike, and the great forests of Kashyyyk are burned to the ground! It's jam-packed with the action, heartbreak, and deception that makes Legacy of the Force such a great series.

Luke Skywalker wanted to unify the Jedi Order and bring peace to the universe. Instead, his wife, Mara, lies dead at the hands of an unknown assassin, his wayward nephew Jacen has seized control of the Galactic Alliance, and the galaxy has exploded in all-out civil war.

With Luke consumed with grief, Jacen Solo works quickly to consolidate his power and jumpstart his plan to take over the Jedi. Convinced he's the only one who can save the galaxy, Jacen will do whatever it takes, even ambush his own parents.

With the Rebel confederacy driving deep into the Core to attack Coruscant and the Jedi under siege, Luke must reassert his position. Only he can lead the Jedi through this crisis, but it means solving the toughest problem Luke's ever faced. Does he fight alongside his nephew Jacen, a tyrant who's taken over the GA or does he join the rebels to smash the Galactic Alliance he helped create?