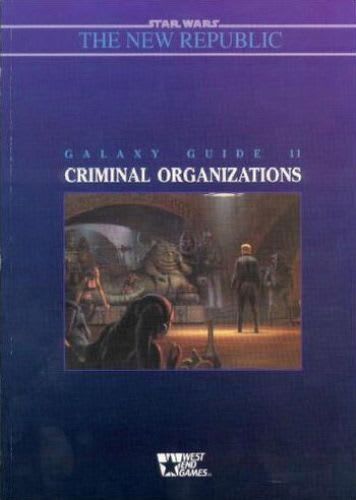 Galaxy Guide 11: Criminal Organizations is a supplement to Star Wars: The Roleplaying Game written by Rick D. Stuart and published by West End Games in 1994. The sourcebook is set in the time frame six years after Star Wars: Episode VI Return of the Jedi, following the events of the Dark Empire comic series, though the guidelines presented can be used by the gamemaster for adventures set in any era. Note that Galaxy Guide 11 was published prior to the Star Wars: Shadows of the Empire multimedia project, so there is no mention of Black Sun. Slaving, spice mining, smuggling, gun-running... whenever there is a demand for a product—any product—there is someone who will supply the goods, no matter what! From huge crime bosses to low-life thugs, and slavers, criminals have a large influence in the Star Wars galaxy! As the Galactic Civil War between the New Republic and the Empire continues, the forces of law and order face a struggle to control the growth of crime. From independent operators to crime syndicates and the awesome Hutt kajidic, this Galaxy Guide provides a valuable reference for everyone who wants to incorporate the galactic underworld into their adventures.