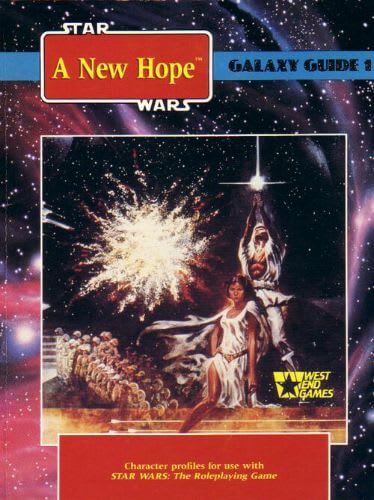 The first edition of Galaxy Guide 1: A New Hope is a supplement to Star Wars: The Roleplaying Game written by Grant S. Boucher, and published by West End Games for first time in 1989, re-edited with major additions in 1995. The book is written in an in-universe perspective, as though it were the research project of a Rebel historian. The guide features character profiles with RPG stats for main and some secondary characters from the film Star Wars: Episode IV A New Hope. This book created for the first time complete backgrounds, races, planets, and names for elements appearing in the film, many of which were reintroduced following the 2014 Legends announcement to become a part of the modern Star Wars canon. The second edition was published in 1995. The main change of the new edition is to adapt the stats included to the Second Edition rules, but the articles were also extended to include vehicles, starships and equipment, not only characters like in the original guide. Here it is! A definitive collection of backgrounds, statistics, and information on the heroes and villains from the original Star Wars movie! This comprehensive guide to the Star Wars galaxy details the aliens, Imperials and Rebels that figured in those crucial weeks leading up to the Battle of Yavin. First in a series of guides to the greatest space fantasy film of all time, A New Hope includes character histories and never-related-before information that makes this volume a must for movie fans and players of the Star Wars game.