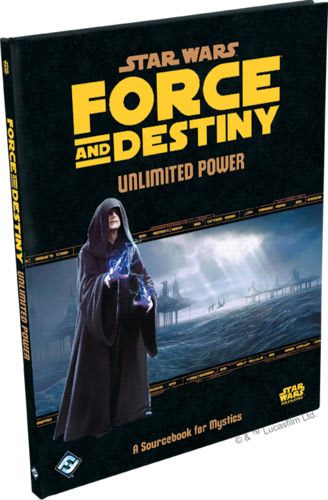 Unlimited Power is a sourcebook for Fantasy Flight Games' Star Wars: Force and Destiny roleplaying game. Fantasy Flight Games is excited to announce Unlimited Power, an all-new sourcebook for Mystic characters in the Star Wars™: Force and Destiny roleplaying game. The moment Luke heard his uncle call Ben Kenobi a "wizard," the Star Wars galaxy became one of magic and mysticism, and the Mystic is a fundamental part of both Star Wars and the Force and Destiny roleplaying game. Unlimited Power, the new sourcebook for Mystic characters, greatly expands options for Mystic characters in your campaign. New Force powers will offer untold advantages and tie your characters even more deeply to the mysterious energy that binds the galaxy together and the ancient practice of alchemy enters your games of exploring the deeper mysteries of the Force. A Mystic's goal is to be an ally and partner to the Force, never its master. By allowing the Force to flow through them, the they are able to unlock unlimited potential and discover their destiny in the galaxy. Between the Jedi and the Sith, you already know there is no definitive Mystic realization, and Unlimited Power introduces three new specializations to join the Makashi Duelist, Advisor, and Seer options already available. More than just a sourcebook for Mystic players, Unlimited Power includes three new species tuned in to the Force, new equipment, adventure ideas to allow your Game Master to weave mysticism into your campaign, and plenty of new lore to expand your galaxy.