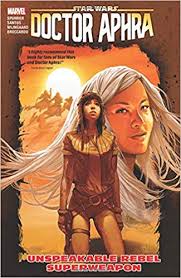 Publisher's SummaryBooks in this SeriesYoutini ReviewVideo ReviewStaff ReviewsCommunity ReviewsVideosCollections
Comprising a five-issue miniseries, Galaxy’s Edge provides readers a visual adventure through Disney’s Star Wars themed land in a story set between the events of The Last Jedi and The Rise of Skywalker. Fans encounter favorite characters like Han, Chewie, Hondo Ohnaka, and Doctor Aphra, while meeting newcomers like Dok-Ondar and Kendoh Voss. The series serves to deepen the already storied past of Black Spire Outpost, giving travelers another reason to marvel at the place on their next trip to Batuu.

After a year of close shaves, Doctor Chelli Aphra is taking it easy and lying low. Probably herding banthas or something. She's smart like that, right? No, not really. The galaxy's shadiest archaeologist is back doing what she does best: busting into alien temples to steal horrifying weapons for huge profit. She just can't stop herself. But plenty of other people could. Powerful factions are watching closely: Rebel and Empire, familiar and strange - all calculating whether Aphra's more useful alive...or dead.