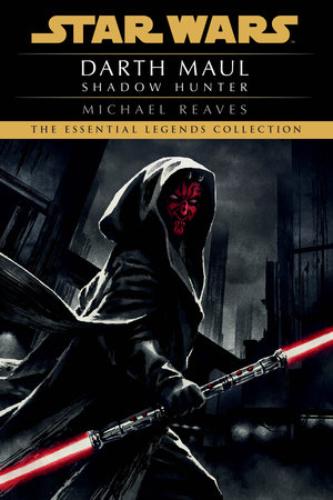 By
Michael Reaves
Released
Aug 2, 2022
Artwork by
Narrated by
Takes place in
32 BBY
In the
Rise of the Sith
era
Part of the
The Essential Legends Collection Series
Collects
Masterpiece
Incredible
Good
Fair
Mediocre
Community Rating
#
in the
Youtini Reading Order

Plans for the Trade Federation’s blockade of Naboo is at risk of being compromised, so Darth Sidious sends his skilled apprentice to Coruscant to take care of the problem. Completely loyal to his master, Darth Maul vows to crush any threat that is prone to delivering their secret agenda to the Jedi.

Shadow Hunter is a spectacular display of a Sith apprentice’s devotion to their master. Darth Maul had been trained by Darth Sidious since he was a child, and it shows in the way he hunts his prey and fuels on his anger to finish the job.

Part of the Essential Legends Collections Series to celebrate the 50th anniversary of Lucasfilm, a reprint of the classic Legends novel, Darth Maul: Shadow Hunter

Darth Maul, merciless apprentice of evil and one of the legendary Sith, a twisted order given over to the dark side of the Force…Darth Maul, champion of the nefarious Sith Lord, Darth Sidious…Darth Maul, a legend sprung to life from the nightmares of history, about to be unleashed…in an all-new tale of intrigue and mystery set just before the events of Star Wars: Episode I The Phantom Menace.

After years of waiting in the shadows, Darth Sidious is taking the first step in his master plan to bring the Republic to its knees. He meets secretly with his Neimoidian contacts in the Trade Federation to plan the blockade of the planet Naboo. But one member of the delegation is missing, and Sidious does not need his Force-honed instincts to suspect betrayal. He orders his apprentice, Darth Maul, to hunt the traitor down.

On Coruscant, capital city of the Republic, the Neimoidian moves quickly to sell what he knows to the highest bidder. For Lorn Pavan, an information broker, the deal is too good to pass up. He grabs it, unaware that he has now earned a place on Darth Maul's hit list, right behind the Neimoidian defector himself.

Meanwhile, a young Jedi Padawan by the name of Darsha Assant stands on the verge of ascension to Jedi Knighthood. A single mission will be her test. But a greater test awaits her. For in the labyrinthine alleyways and sewers of Coruscant's own dark side, she will cross paths with Lorn, who is fleeing from the Sith stalker, carrying with him crucial information that must reach the Jedi Council at all costs.

The future of the Republic depends on Darsha and Lorn. But how can an untried Jedi and an ordinary man, stranger to the powerful ways of the Force, hope to triumph over one of the deadliest killers in the galaxy?