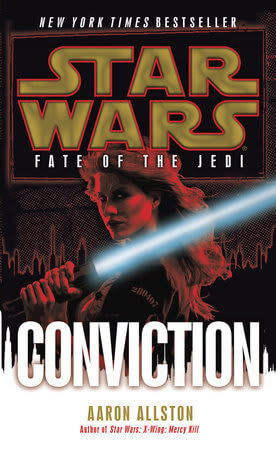 By
Aaron Allston
Released
May 24, 2011
Artwork by
Narrated by
Marc Thompson
Takes place in
44 ABY
In the
Legacy
era
Part of the
Fate of the Jedi Series
Collects
Masterpiece
Incredible
Good
Fair
Mediocre
Community Rating
#
135
in the
Youtini Reading Order

Publisher's SummaryBooks in this SeriesYoutini ReviewVideo ReviewStaff ReviewsCommunity ReviewsVideosCollections
The Abeloth-induced Jedi psychosis continues to rage among their ranks, especially in Valin and Jysella Horn. Saba Sebathyne becomes interim Chief of State when the Jedi remove Daala from office. The Sith look to take out the Jedi Queen of their visions—leading them to Hapes. Aaron Allston's interests are on display as this novel is full of espionage, political and military coups, romance, and Tahiri Veila's trial.

Chief of State Natasi Daala has been overthrown, and the Jedi Order has taken control of the Galactic Alliance. But while the new governors dismantle Daala’s draconian regime, forces still loyal to the deposed official are mobilizing a counterstrike. And even the Jedi’s new authority may not be enough to save Tahiri Veila, the former Jedi Knight and onetime Sith apprentice convicted of treason for the killing of Galactic Alliance officer Gilad Pellaeon.

Meanwhile, Luke and Ben Skywalker are relentlessly pursuing Abeloth, the powerful dark-side entity bent on ruling the galaxy. But as they corner their monstrous quarry on the planet Nam Chorios, the two lone Jedi must also face the fury of the Sith death squadron bearing down on them. And when Abeloth turns the tables with an insidious ambush, the Skywalkers’ quest threatens to become a suicide mission.

Check Out the entire
Fate of the Jedi Series
