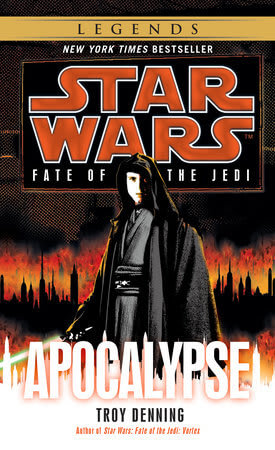 By
Troy Denning
Released
Mar 13, 2012
Artwork by
Narrated by
Marc Thompson
Takes place in
44 ABY
In the
Legacy
era
Part of the
Fate of the Jedi Series
Collects
Masterpiece
Incredible
Good
Fair
Mediocre
Community Rating
#
137
in the
Youtini Reading Order

Publisher's SummaryBooks in this SeriesYoutini ReviewVideo ReviewStaff ReviewsCommunity ReviewsVideosCollections
In the explosive finale to the Fate of the Jedi series, the Jedi secretly arrive on Coruscant to discover that the Lost Tribe of the Sith have invaded the planet on every level of society. The Jedi and Sith face off in a climactic battle of epic proportions and Abeloth's conquest comes to a head in a shockingly mythological twist. . .

In the stunning finale of the epic Fate of the Jedi series, Jedi and Sith face off—with Coruscant as their battlefield. For the Sith, it’s the chance to restore their dominance over the galaxy that forgot them for so long. For Abeloth, it’s a giant step in her quest to conquer all life everywhere. For Luke Skywalker, it’s a call to arms to eradicate the Sith and their monstrous new master once and for all.

In a planetwide strike, teams of Jedi Knights take the Sith infiltrators by swift and lethal surprise. But victory against the cunning and savage Abeloth, and the terrifying endgame she has planned, is anything but certain. And as Luke, Ben, Han, Leia, Jaina, Jag, and their allies close in, the devastating truth about the dark side incarnate will be exposed—and send shock waves through the Jedi Order, the galaxy, and the Force itself.

Check Out the entire
Fate of the Jedi Series
