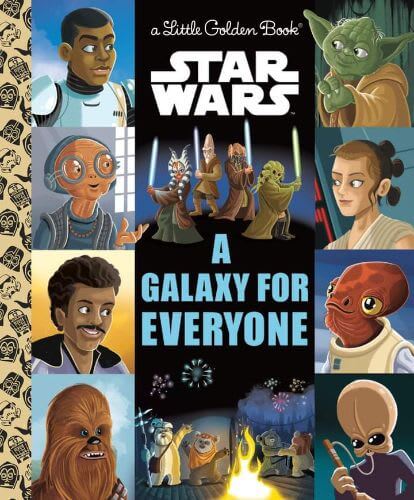 A Galaxy for Everyone

Celebrate the diversity of the Star Wars universe with this Little Golden Book! Some are big, and some are small. Some are young, and some are old. Some are queens, and some are scavengers. All off the aliens and beings from the Star Wars saga are very different, but each and every one of them plays an important role in the galaxy. This Little Golden Book celebrates the wonderful diversity in the Star Wars saga. Featuring stunning retro stylized illustrations, this book includes characters from all of the Star Wars films. It is perfect for Star Wars–and Little Golden Book–fans of all ages. Star Wars has captivated millions worldwide for almost forty years. The phenomenon began with the 1977 theatrical debut of Star Wars, later retitled A New Hope, and has expanded to include six additional major motion pictures (The Empire Strikes Back, Return of the Jedi, The Phantom Menace, Attack of the Clones, Revenge of the Sith, The Force Awakens, The Last Jedi, Solo: A Star Wars Story, and The Rise of Skywalker), television programming, publishing, video games, and much more, with new films coming every yea