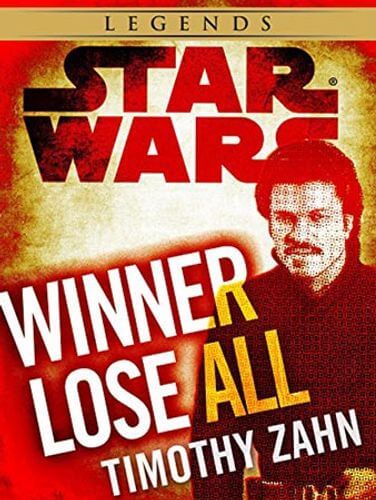 By
Timothy Zahn
Released
Dec 10, 2012
Artwork by
Narrated by
Takes place in
0 ABY
In the
Rebellion
era
Part of the
Collects
Masterpiece
Incredible
Good
Fair
Mediocre
Community Rating
#
in the
Youtini Reading Order

When a card tournament is held with a prize worth a staggering amount of credits, it’s no surprise that Lando Calrissian finds himself at the table. Determined to walk away victorious, he’s prepared to use every ounce of swagger, charm, and cunning at his disposal. However, other players are quite determined as well, and when a pair of master thieves approach Lando with concerns about the authenticity of the prize, it becomes clear that someone is working behind-the-scenes and that Lando may be gambling with his life instead of just credits.

This novella was initially released as a e-book, but was included in later editions of Zahn’s full-length novel Scoundrels because it serves as a direct prequel to that story. Even in this shortened format, Zahn remains a powerful story teller, and at only 62 pages, there’s really no reason not to check this out.

Lando Calrissian’s no stranger to card tournaments, but this one has a truly electrifying atmosphere. That’s because the prize is a rare sculpture worth a whopping fifty million credits. If Lando’s not careful, he’s going to go bust, especially after meeting identical twins Bink and Tavia Kitik, master thieves who have reason to believe that the sculpture is a fake. The Kitiks are beautiful, dangerous, and determined to set things right—and they’ve convinced Lando to help them expose the scam. But what they’re up against is no simple double cross, nor even a twisted triple cross. It is a full-blown power play of colossal proportions. For an unseen mastermind holds all the cards and has a fail-proof solution for every problem: murder.