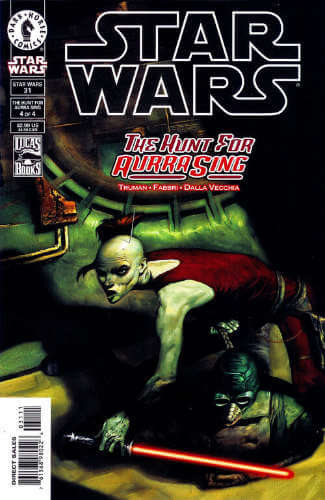 Star Wars 31: The Hunt for Aurra Sing, Part 4 is the thirty-first issue of Star Wars and the conclusion of the Hunt for Aurra Sing story arc. It was written by Timothy Truman, illustrated by Davidé Fabbri, and published by Dark Horse Comics on June 27, 2001. On a dangerous jungle planet, the Dark Woman is shot and wounded while Aurra Sing seeks to kill her next mark—the corrupt senator, Tikkes. The three Jedi who stand in her way, Adi Gallia, Ki-Adi-Mundi, and A'Sharad Hett, attempt to defend the remnants of the senator's suspicious Quarren expedition, rescue the Dark Woman, and bring Aurra Sing to justice before she carries out another assassination! Sing is pleased with this chance to add to her lightsaber collection while completing another deadly job! When confronted by Sing, will A'Sharad Hett succumb to his darkest desires and ultimately seek vengeance for the murder of his father? Will three Jedi be enough to take down this heartless warrior? "The Hunt for Aurra Sing" concludes with this exciting finale!