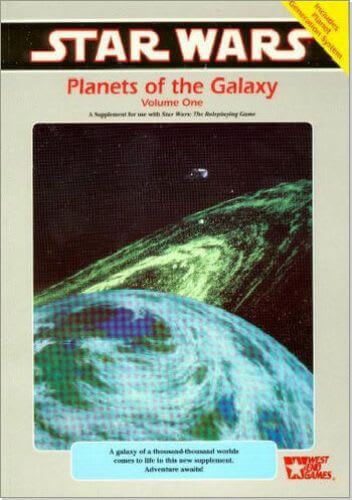 Planets of the Galaxy, Volume One

Planets of the Galaxy, Volume One is a book written by Grant S. Boucher, Julie Boucher, and Bill Smith for Star Wars: The Roleplaying Game, published by West End Games in December 1991. Front cover A galaxy full of thousand-thousand worlds comes to life in this new supplement. Adventure awaits! Back cover Hurling through the darkness of the void are the planets of the Star Wars galaxy. While the Galactic Civil War rages on, there are new worlds to explore, profits to be made, allies to be discovered, enemies to be voided. The adventure awaits. Planets of the Galaxy: Volume One introduces gamemasters and players to some of the most exciting and unusual worlds of the Star Wars galaxy. Explore the space lanes, and battle the Void Demon pirate gang of Isen IV, or earn a living smuggling the amazing Garnib Crystals sculpted by the free-spirited Balinaka people. Carry the torch of freedom to Imperial worlds like Celanon, one of the greatest trade planets in all of the Empire. Match wits with the crafty and dangerous Sonori, who huddle in huge subterranean cities, while their world is pelted by an endless stream of meteroites and asteroids. An entire galaxy of adventure awaits brave Rebels and shrewd free traders! 80-page book features: Ten new worlds with complete information on native sentient species and their unusual cultures. Adventure hooks and diagrams so gamemasters can use these planets immediately. A Planet Generation System, with information on creating exciting new worlds for the Star Wars galaxy. New villains, equipment, vehicles and creatures suitable for use in any Star Wars adventure.