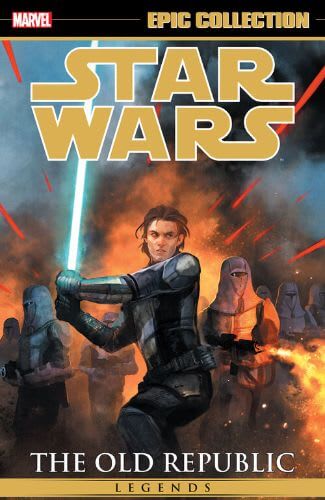 Publisher's SummaryBooks in this SeriesYoutini ReviewVideo ReviewStaff ReviewsCommunity ReviewsVideosCollections
This is the explosive and epic finale to John Jackson Miller's series that following the misadventures of the horrible failure of a Padawan, Zayne Carrick, who was framed for the murder of his fellow students by his master. The rogue Jedi Consulars called the Jedi Covenant, obsessed with preventing the return of the Sith, pursue Zayne and his friends Gryph, Jarael, and Camper from one corner of the galaxy to the other. All of this is set in the context of the Mandalorian Wars, at once a sequel to the 90s Tales of the Jedi series and a prequel to the massively popular video game, Knights of the Old Republic.

Star Wars Legends Epic Collection: The Old Republic Vol. 3 is the third Epic Collection trade paperback of the Star Wars: Knights of the Old Republic comic series. It collects the same issues as Star Wars Omnibus: Knights of the Old Republic Volume 3 by Dark Horse Comics, as well as additional material from Star Wars Tales 24. A new direction for fugitive Jedi Zayne Carrick! With his allies by his side - his best friend, Gryph, the mysterious Jarael, and the former Mandalorian warrior Rohlan - Zayne sets forth on seat-of-your-pants adventures filled with ghost ships, renegade droids and high-speed racers! A death-defying shoot-out on the face of a comet leads right into the heart of one of the galaxy's most cruel organizations - the slave-trading Crucible! Zayne risks his life - and maybe his sanity - to help Jarael face her dark past, but the consequences could be deadly for his crew! And, as Zayne Carrick's saga draws to a close, he'll face what may be his most dangerous enemy yet - the demonic Demagol!