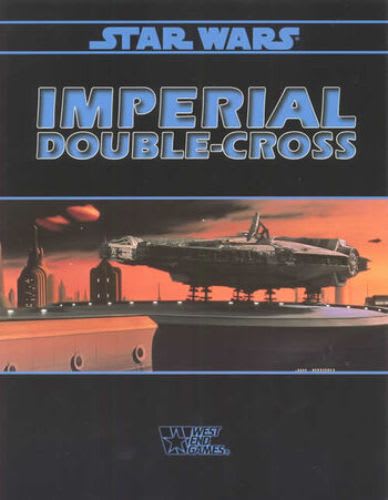 Imperial Double-Cross was an adventure supplement for Star Wars: The Roleplaying Game published by West End Games in 1997 The turbolift door opened, and Darrik stepped out into a dimly lit corridor. Instead of the polished, white synthetic stone of Cloud City's upper levels, this area was constructed of pipes, hissing air vents, and dingy deck grating. A blue light filtered in from a dirty window to the right—it overlooked a vast chasm, probably some sort of central core wind tunnel. To the left, the boy saw the other turbolift tubes. A passage lined with coolant pipes led beyond. He watched the Rodian bounty hunter's shadowy form walking cautiously down that corridor. Darrik followed. The passageway opened into a small plaza with large doors on all sides except this one. Platt was near one of the doors, fiddling with a control pad. The Rodian sneaked over to a darkened corner and silently pulled his blaster pistol from its holster. What would you do? Now you can decide. In this stand-alone roleplaying game book, you play Darrik, a young human with dreams greater than his hum-drum homeworld. Through a series of short stories and adventures, you'll run into stormtroopers, bounty hunters, and sinister Imperial agents. You make the decisions, but your success also depends on your skills and a bit of the Force. All you need to play is a pencil, some six-sided dice, and your imagination!