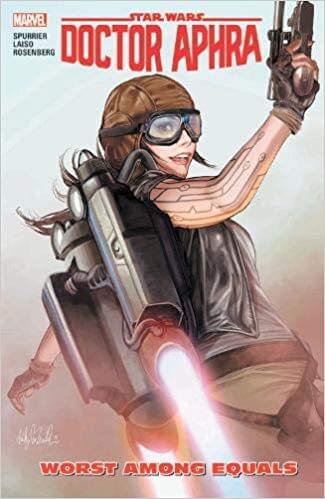 Publisher's SummaryBooks in this SeriesYoutini ReviewVideo ReviewStaff ReviewsCommunity ReviewsVideosCollections
If Star Wars and Saw ever had a crossover, it would probably be something like Doctor Aphra: Worst Among Equals. Chelli Aphra has to race against the clock to diffuse a bomb in her neck by skipping town while sticking with Triple Zero who is trying to kill her also while avoiding other bounty hunters who are trying to capture her. Oh, and the only way she can move is by hopping on one leg and breathing only through her nose with her eyes closed. Just kidding, but that’s probably what it feels like for poor ol’ Aphra.

Doctor Aphra - worst among equals! On the run from the law in a massive alien metropolis, Aphra has ten hours to cross the hostile megacity before the bomb implanted in her throat explodes. And don't forget the pack of bounty hunters and crazed cops that are on her tail. No big deal, right? But there's one more wrinkle - Aphra can't stray more than a few paces from her companion without activating the bomb's proximity alert and blowing both of them up. And that companion is Triple-Zero, a sadistic murderous droid who's more interested in Aphra's death than in playing nice... Tune in for a brand-new manic misadventure starring the galaxy's foremost amoral archaeologist!