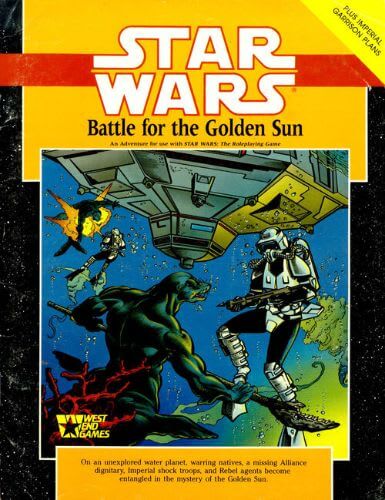 Battle for the Golden Sun

Battle for the Golden Sun is a Star Wars Legends adventure book for use with Star Wars: The Roleplaying Game. The adventure scenario follows a special team of Rebel Alliance agents who volunteer for a mission to the legendary waterworld of Sedri in search of a missing Alliance dignitary while trying to solve the mystery of the Golden Sun. The Battle for the Golden Sun set includes a full-color map of an Imperial Sea Garrison. Battle for the Golden Sun was written by Douglas Kaufman and published by West End Games in November 1988. Front 'On an unexplored water planet, warring natives, a missing Alliance dignitary, Imperial shock troops, and Rebel agents become entangled in the mystery of the Golden Sun.' Back A navigational accident has led the Empire to the mysterious and legendary water world of Sedri. Rebel spy networks carry troubling tales back to Alliance High Command, rumors that Sedri holds the secret of the Golden Sun — a secret that could give the Empire the power to crush the Rebellion once and for all! An Alliance dignitary, young and impetuous, disappeared while checking into these disturbing rumors. Now a special team of Rebel agents volunteer to undertake a desperate mission. Guided by a half-sane Mon Calamari, they must make their way to Sedri, locate the missing dignitary, avoid Imperial entanglements, and solve the mystery of the Golden Sun. If the rumors prove even partially true, then this band of Rebels is all that stands between the Empire and total control of the Galaxy… 40-page booklet features: An exciting skript with a part for each player that brings their characters to life and plunges them right into the action. Detailed descriptions and maps of an underwater village and the mysterious Sun Caves of Sedri. Background information on a new race of sea dwellers from the planet Sedri. A pull-out section full of colorful non-player character templates for an added dimension in roleplaying excitement. Also includes: A poster-size, full color map of an Imperial Aquatic Garrison - a complete base with descriptions of important areas, special equipment, and undersea stormtroopers. Extensive guidelines to help gamemasters make their adventures fast-moving, challenging and fun. A complete adventure for Star Wars: The Roleplaying Rame. For gamemaster and one or more players.