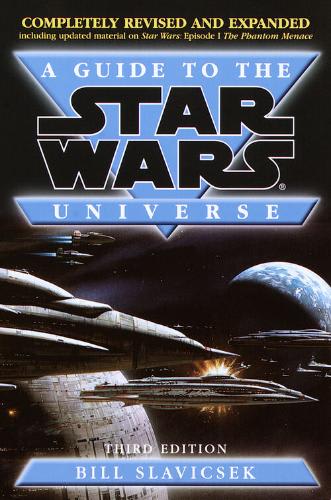 A Guide to the Star Wars Universe, Third Edition compiled

By
Bill Slavicsek
Released
Oct 3, 2000
Artwork by
Ralph McQuarrie
Narrated by
Takes place in
In the
era
Part of the
Collects
Masterpiece
Incredible
Good
Fair
Mediocre
Community Rating
#
in the
Youtini Reading Order

A Guide to the Star Wars Universe, Third Edition, Revised and Expanded is a reference book that was written by Bill Slavicsek and published in 2000. It was a revised and expanded version of the earlier first and second editions. How did Exar Kun nearly destroy Luke Skywalker's Jedi academy? When did Han Solo first meet Chewbacca and Lando Calrissian? Where was Mara Jade when the Emperor died? What are the secrets of the terrible super weapons – the Death Stars, the Sun Crusher, and the World Devastators? What are the Qom Qae? How powerful is the Black Sun criminal organization? Looking for facts about the characters, starships, weaponry, droids, alien species, and historic battles in the most amazing adventure of them all? From airspeeders to N-1 starfighters, Coruscant to Tatooine, Nom Anor to Leia Organa – you'll find the whole universe of Star Wars covered here: The original Star Wars trilogy movies The novels – from Star Wars to Vector Prime The animated TV series Droids and Ewoks National Public Radio dramatizations Young Adult novels The Star Wars comic-books Role-playing books Video games and CD-ROMs …plus sourcebooks, storybooks, sketchbooks, portfolios, and more! Featuring new material on Star Wars: Episode I The Phantom Menace … the latest Star Wars series: The New Jedi Order . . . and the entire thrilling saga!