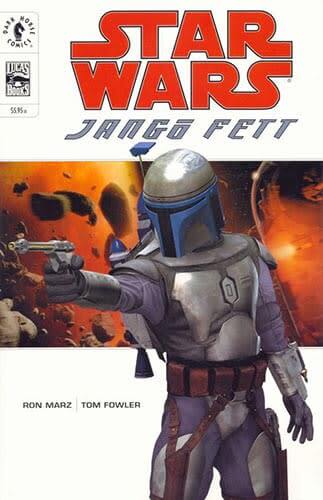 By
Ron Marz
Released
Mar 13, 2002
Artwork by
Tom Fowler
Narrated by
Takes place in
27 BBY
In the
Rise of the Sith
era
Part of the
Collects
Masterpiece
Incredible
Good
Fair
Mediocre
Community Rating
#
in the
Youtini Reading Order

Publisher's SummaryBooks in this SeriesYoutini ReviewVideo ReviewStaff ReviewsCommunity ReviewsVideosCollections
For the greatest bounty hunter in the galaxy, nothing can stop nothing can stop Jango Fett from getting the job done. But that won’t stop Black Sun, ambitious cantina thugs, massive jungle roaches, Force-sensitive primitives, and fellow other bounty hunter Zam Wesell from trying. Because both Jango and Zam have been hired to steal an ancient and powerful artifact from an unknown world, and neither of them wants to miss out on the payday.

A solitary figure, clad in the distinctive armor of a Mandalorian Warrior, cuts through a throng of soldiers, bounty hunters, and cutthroats, unleashing a barrage of blaster fire with graceful, cold-blooded dexterity. This could only be the most notorious assassin in the galaxy: Jango Fett! This Christmas, Dark Horse Comics is giving you something you've always wanted, a glimpse of Boba Fett, the most mysterious and beloved of all the Star Wars rogues. First you'll meet Jango Fett, a bounty hunter and killer for hire who is looking for a lucrative job. When Jango is hired to recover a rare and extremely valuable artifact, he thinks this could be his biggest score. Only one obstacle stands between him and his prize: a beautiful and deadly rival!