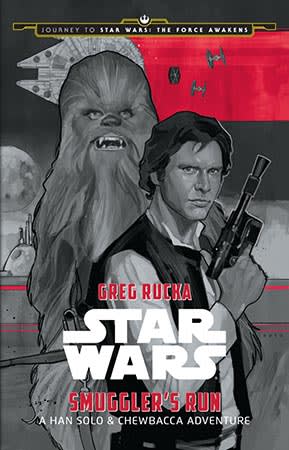 After the destruction of the Death Star, Han & Chewie are more than happy to take their promised reward and head off to pay back Jabba the Hutt, but Princess Leia Organa has something else in mind for the duo. A quick rescue mission to help the burgeoning Rebellion - what harm could it do?

Bounty hunters and Imperials, alike, repeatedly chase the pair across the planet Cyrkon, and by the time it’s all over, Han finds himself deeper than he ever thought possible in a cause he tried so long to avoid.

It is a period of civil war. The heroic freedom fighters of the REBEL ALLIANCE have won their most important victory thus far with the destruction of the Empire's ultimate weapon, the DEATH STAR.

But the Rebellion has no time to savor its victory. The evil Galactic Empire has recognized the threat the rebels pose, and is now searching the galaxy for any and all information that will lead to the final destruction of the freedom fighters.

For the MILLENNIUM FALCON's crew, who saved the life of Luke Skywalker during the Battle of Yavin, their involvement with the rebels is at an end. Now HAN SOLO and CHEWBACCA hope to take their reward and settle some old debts. . . .

Meg Dowell
Editor-in-Chief
Even though I'm not the intended audience for this book, I still had a blast reading it. It's less than 200 pages, fast-paced, and fun. The author captures the essence of both Han and Chewbacca perfectly, and at points it almost feels like you are reading an extension of A NEW HOPE. Han and Chewie take on an assignment for the Alliance and find themselves on the run from bounty hunters, and you can't help turning page after page wondering how one of our favorite Star Wars duos is going to get themselves out of trouble this time. A quick read for a quiet evening or weekend, but definitely worth it if you're in the mood for something light and fun.